Best Free Video Converter Apps for Android Without Ads in 2023

With the screen resolution constantly improving, the activity of watching videos is becoming more and more necessary day by day. That's why we investigated the factors that prevent Android users from watching more videos. We found compatibility to be the influencing factor with the highest response rate. Yes, we can play format options like 3GP, MP4, and other compressed videos on Android; But most of the HD video formats, such as AVI and MKV, cannot be played. Also, sometimes people just want to listen to music; While music videos are not supported on Android phones. Fortunately, many developers have realized that they must find a solution to such demands and have already released video converter apps for Android users.

When it comes to converting a video to a different format, most of us use Handbrake on PC or some online service. But as Android devices become more powerful day by day, you can easily convert any video from one format to another with just a few clicks. But to pick the best video converter apps from a variety of average apps, we look for features like an intuitive interface, few or no ads, support for multiple formats, etc. Here are our picks for the best free video format converter apps for Android. Let us begin.

While there is no shortage of Android video converters on the Google Play Store, most of them are either full of sketchy ads or have a limit on the number of videos you can convert. This is where Video Transcoder comes in.

Video Transcoder is a free and open-source app, which means it won't show you intrusive ads and you won't have to worry about your privacy. Supported formats include Avi, Flv, Gif, Matroska, Mp3, Mp4, Ogg, Opus, and WebM. Also, these are the supported video codecs: H.264, MPEG-1, MPEG-2, MPEG-4, VP8, VP9, and Xvid.

Timber is not only a video and audio converter, but it is also a video editor to some extent: it can cut and merge videos.

The app is built on the basis of the FFmpeg library used by many of the popular video converters on this list. It supports different formats like mp4, Flv, Avi, Mkv, WebM, and MPEG for video and mp3, wav, FLAC, m4a, aac, and WMA for audio. It can also convert GIFs to videos, unlike many of the other converters on this list. There is no limit to the number of files you can manage and add. The app is completely free and comes with advertising.

You can read also: the 18 Best WhatsApp Mod App

This app on the list allows you to convert video to audio. There are many applications that can convert videos, but most of the storage space on the phone is used due to music videos that I never watch. I will gladly convert all videos to audio to save space on the phone. You can choose between MP3 and AAC as output and adjust the bitrate of the audio. The built-in editor allows you to cut clips that are on the conversion screen. The app also has some advanced features that you can use to adjust the frequency, channel, and fade in and out of the audio. 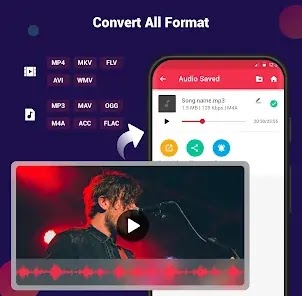 This app also has a dedicated video and audio cutter that can come in handy when capturing extra bits from media files. It's a decent app that works well and you can use it to improve the effectiveness of your media library.

With the Fastest video to mp3 converter, you can cut and trim video files, merge audio and convert video to MP3 with many options in a few seconds. You can extract high-quality mp3 songs from video FAST.

Powerful converter with many options：

Price: This app is free of cost and available on the google play store for android but it charges some money for a paywall. Some features are locked, such as converting multiple files, fading/ejecting, merging 3 or more files, and a musical version that can be purchased for a one-time fee of $3.99.

You may also like: Most Essential Apps For  Android

VidSoftLap Video Converter has a beautiful and smooth user interface that is packed with features. Of course, as the title suggests, you can convert videos between different formats like MP4, FLV, MPEG-1.2, MOV, MKV, WMV, AVI, VOB, 3GP, etc. directly on your Android device. Apart from that, you will also be provided with other useful tools that can do different things like crop, add slow motion effects, extract audio from video (useful when you want to extract audio from your favorite video), reverse video effects, etc.

The good thing about the app is that it displays all the available videos right on your home screen. If you cannot find the video, choose the Browse option to find the video you are looking for. While you are choosing the conversion settings, the app will show you different preset options specific to the device you will be using, such as Windows, Android, BlackBerry, Apple, Sony, etc., and specific formats like MP4, 3GP, MKV, etc.

If you can't find the format you're looking for, simply select the "General" option and the app will let you choose the format from a drop-down list on the next screen. If you want, you can even choose other settings like FPS, resolution, codec, etc. as needed.

Pricing: The base app is free and ad-supported, and some formats and options are locked behind a paywall. To unlock all options and get rid of apps, you need to buy the pro version for around $2.

I'll be the first to say that Media Converter's user interface looks almost ten years old. But that doesn't matter because the app is really good at what it does and easy to use even for beginners. Media Converter FFmpeg is used in the background to convert your videos. The application supports a large number of file formats, from the most popular and used to the most obscure. Some of the supported formats include but are not limited to FLV, MOV, MP4, 3GP, WMA VOB, MPG, MKV, etc.

As I said before, the app is very easy to use. When you choose a video to convert, it will show you two of the most popular options "Convert to MP3" and "Convert to MP4". If you want to convert your video to another format, all you have to do is choose the third option through the Expert Mode option. On this screen, you can choose a custom file format, cut and crop, change audio quality, cut video, change resolution, change video quality, etc. Once you're done with the settings, click the Convert button and you're ready to go.

If you are looking for a simple and lightweight video converter that supports almost all video file formats, give Media Converter a try and see if it suits your needs.

You should also read: 7 Types of Dangerous Apps delete immediately

Prices: The application is completely free and with advertising. However, unlike other apps, the ads are not intrusive, at least that is the case when using it.

Today I have given the top 5 free video converters for Android smartphones. Guys, please give directly downloadable links for video converter apps. there are some applications that are open source code. If you're an Android developer, you can get the source code for these apps on GitHub. You can modify the applications according to what you need.

You can download and install the top five free Android apps where you can convert different formats of videos and audio. You can convert GIFs to video and convert audio files that suit your smartphone apps.